Home >Article: The Only Goal You Can’t Accomplish! 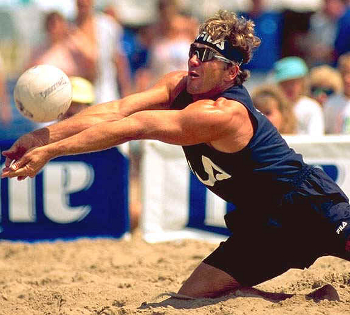 This article has been published in numerous newsletters, trade journals and company publications.

I got paid a lot of money to play a game. A game that many of us enjoy at a company picnic or during a visit to the beach or the park. My version of the game of volleyball is a little different than your picnic version. In my game the ball travels over 90 miles an hour. Two grown men try to cover a court that was designed for 6 people. You’ve taken a walk on the beach. Normal people suck air and get screaming muscles just trying to walk in fine beach sand that collapses under your weight and seems to grab and hold your ankles like quicksand … we jump up and down in this stuff and try to smash a ball over a net that spans eight feet above the sand, while a bronzed, chiseled muscular specimen of a professional athlete uses every physical resource he has to try and slam that ball right back in your face … the harder the better. That’s the way we p

I can measure my career in lacerations, scar tissue, broken noses, torn ligaments, and broken fingers … some mine … some inflicted on others. My game is so intense that you always see veins popping on foreheads, striated neck muscles, bodies stretched to the absolute physical limits, and involuntary primal screams of pain or exertion on every play. I’ve played on beach sand baked so hot by the sun that you get blisters on the fleshy underside of your toes … and yet you keep on playing. Sometimes they break and bleed, sometimes they don’t … either way you keep on playing.

I’ve played in matches where the next point is worth thousands of dollars. Maybe you’ve seen my version of the game, the huge three-story inflatable bottle of tequila or can of beer, the professional bikini contest between matches, the ESPN cameras and crew, hard bodies, soft bodies, big crowds and the leader board with recognizable names like Karch Kiraly, Randy Stoklos and Singin Smith. Sometimes my name was on it too … sometimes it wasn’t.

As a former Pro Beach Volleyball Tour player and Olympic caliber player I know a lot about going for your goals, and unfortunately, I’ve had more than my share of experience in not accomplishing them.

My frame of reference says that there really is only one goal that you can not accomplish.

Have you ever had someone give you a piece of advice that stuck with you for life? I was fortunate enough to run into a mentor who gave me a gem of information that was to become my philosophy and my standard of excellence, and it happened when I was only thirteen years old. At a volleyball clinic, the defensive specialist for the Canadian Olympic Team was coaching me on what it would take to be an Olympic team contender. He told me that I would have to get so good at playing defense that I had to realistically have a shot at getting to any ball, no matter where on the court it was, regardless of how fast it was hit, or how far away it was.

Now my eyes were probably like quarters, and in terms of hero-worship, I was off the scale, just being in the presence of this Olympic athlete. If he had told me that green M&M’s were to fall out of the blue sky I would have run outside to catch them. Yet, even with this blind belief that anything he said was potentially the path to the Olympics for me, I must have betrayed some of my13-year-old skepticism. I probably had a combination look of “there’s no way that that can be the truth” and “if that is true there’s no way in the world that anyone can be that good … especially me.”

Sensing my consternation, he then pulled me aside and put his arm around my shoulder like a confidant and peer, and said words that over twenty years later I can still recall.

“Son, you have the potential to be an Olympic athlete.” my heart soared. He was the first one to ever say that to me. “But the reality is that you really do have to be so good, that you can defensively get to any ball at all and keep it from hitting the floor. Judging by the look on your face you’re concerned that you might not be able to do that. But there’s also a secret. A secret to being that good. You have to believe, truly believe in every fiber of your heart, that the only ball you can’t get to, is the one you don’t go after. I can’t guarantee that you’ll get every one you go after. I can guarantee that you will not get to a single ball that you don’t go after.”

“You also need to learn techniques to go with your motivation.”

I remember my incredible motivation at that moment, knowing that I had the secret. I can remember the next defensive drill I participated in. I was flying through the air, bouncing on the floor and rolling on the ground. I did whatever it took to get to the ball and pop it up in the air before it hit the ground. I remember the euphoric feeling that I was a “potential” Olympic athlete. The other thing I remember most vividly was that once the motivational intensity of the moment had wore off, I had never experienced such pain in my life, as after that drill. Bruised elbows, knees, hips. You name it, it hurt. It was a double edged lesson. You also need to learn techniques to go with your motivation. It was a great set of lessons.

As I progressed through my career, that philosophy became my internal mantra. The only ball you can’t get, is the one you don’t go after. I became a “wild man” on the court. My eyes had a focused intensity that somehow powered me to be able to make one outstanding defensive play after another and fueled my ascent to the highest echelons of the sport.

In my career, I played about 12 years at the professional level, the international level and at the elite amateur level . When I think back and try to define my career and articulate and define the images of success, the things that come to mind are not the ones you might imagine. I won many medals and championships, but those aren’t my measures of success. I won trophies, and individual honors and accolades, yet, those too, fade as insignificant. I won a lot of money, and yet that too, isn’t an important measure of success.

The internal yardstick by which I measure my career occurred many times. I can remember countless situations where I was playing defense and there was an opportunity to dive after a ball. Yet many times in those situations, my mind would tell me that there was no logical or rational way that I could propel my hand, arm or body under the ball before it hit the ground. It was moving too quickly, it was maybe too close to the ground, or it was already too far away. I can’t begin to describe the immense personal satisfaction that I still get today, knowing that I had a special secret that impacted my internal “wiring,” my “programming,” or my thought process. It was so ingrained in my persona as an athlete to go after every ball, that even in those situations where logic said to my brain “This can’t be done,” my brain overrode that message and said to my body “try anyway!” That is my internal measure of success in my career: going after the ball, even when I rationally knew there was no chance of getting it.

The absolute best part about this measure of success, is that every once in a while in those situations, I did actually get to the ball, even though my brain had told me it was not possible. I will remember every single time as if it had happened yesterday, just as if there was a little video tape running inside my head.

You’ve probably heard advice from the gridiron, from the diamond, from the balance beam, from the hardwood or from the boardroom. Well, here’s one from the beach. The only goal you can’t accomplish … is the one you don’t go after!

It’s Friday afternoon. You’ve promised your client a formal report before the end of the day. You’re running out of time and you think you might not pull it together before quitting time. Have you ever just “bagged it?” Maybe you gave up before you even gave the deadline a try … and worked on your excuse instead.

Or maybe you’re planning a big event and you want to bring in a big name celebrity speaker. But you don’t make the call to try and arrange for your ideal speaker, or don’t ask for who you really want, because you’re pretty sure that the celebrity wouldn’t come and speak to your organization anyway and, you rationalize, they’d probably be too expensive.

Or … did you ever have a dream? Something that you were meant to do. Maybe it is a God given gift that you were meant to utilize. Or an overriding passion, something you love to do. Possibly something that with effort and perseverance, you could have made into a profession. How often do we not follow through on it. Maybe we chose the “safe” route. In the song “Wish you were here”, written by Roger Waters the haunting lyrics ask “Did you trade in a bit part on the stage, for a lead role in a cage?”

These are all examples of the only goal you can’t accomplish. What’s the goal you haven’t gone after?

Have you ever heard the term “An Athlete Mentality?” There may be a lot wrong with today’s athlete. But there is also an incredible mentality that you see in an accomplished athlete. The athlete mentality. The beauty of this athlete mentality, is that it is not limited to the courts, the fields and the stadiums, it can be manifested in the office, the cubicle and during the sales call. It doesn’t take a quarterback, a point guard, or a home run hitter to have an athlete’s mentality. That focused determination can be seen in the eyes of a receptionist, a employee or a salesperson.

What can something like the “Athlete Mentality” mean to you? It is the belief that the only goal you can’t accomplish, whether in business, in your personal life, at work or at home … is the one you don’t go after. Adopt the mentality. Reap your benefits.

What are you willing to do to accomplish it?

In your face … the harder the better. That’s the way we play.